Welcome to the crazy world of amateur radio, and the ramblings of operator G7SYW. My name is Roger, often abbreviated to Rod. I currently live near to the town of Braintree, in the county of Essex which is in South-East England.

So, (Don’t you just hate it when people start a sentence with so?) I was born in North Essex in the early 1960’s. To some people that makes me ancient, to others, I’m still a spring chicken. You make up your own mind where I fit between those two!

I’ve had a keen interest in radio and most things electrical, electronic and mechanical in general since about the age of four or five. Even as far back as primary school I was playing with batteries, bulbs & bits of wire. I was also reading books about electricity and anything electrical.

My parents often told me how, as a child, I would take things apart to find out how they worked, and also, later on that I would then also re-assemble whatever I had taken apart. In the early days, of course, the re-assembly may not have been absolutely correct. 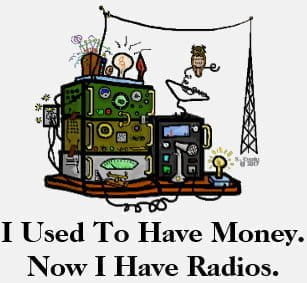 My first real memory of radio was hearing the original Radio Caroline pirate station broadcasting from a ship just off the Essex coast. Being a child at the time I had no idea it was coming from aboard a ship, nor that in the few weeks that followed, it was to become illegal, all I knew was; it was something I liked.

I vividly remember the day after Radio Caroline fell silent, being outside on a sunny day in the garden with my parents, holding a bright red transistor radio, turning the tuning knob, desperately trying to find my favourite radio station, to no avail, remarking “I can’t find Caroline”.

From those early times, I was always fascinated by listening to the different transmissions that I found on the radio.