In the early 90’s I had a Yaesu FT-290R to repair, it was after repairing it that I used it to listen to the local ham radio users which inspired me to sit the exam to gain my ham radio licence.

I decided that my knowledge of radio circuits was sufficient but definitely lacked knowledge of operating procedures.

After a few weeks of home study of the operating procedures, I applied to the City & Guilds institute to obtain my candidate number for the next available exam. Also, a local college had to be contacted to request a place to sit the examinations.

After sitting and successfully passing the Radio Amateur Examinations (RAE) set by City & Guilds, OFCOM issued me with an ham radio operating licence.

Today, it’s possible to request the suffix for a callsign, the system was brought in with the introduction of the equivalent of the current 3 tier licencing system.

With my roots being firmly entrenched in 11m band CB DX-ing, I found I was more often on 11m than using the amateur bands. After losing interest in ham radio and other commitments taking over I took a break from radio altogether and sold most of the equipment.

It was by pure chance that my QSL manager made contact to inform me that he had some QSL cards awaiting collection.

Upon receiving the cards, all from many years ago, my passion in the hobby began to re-ignite.

My interest in amateur radio has now been rekindled and I’m playing with my toys once again. 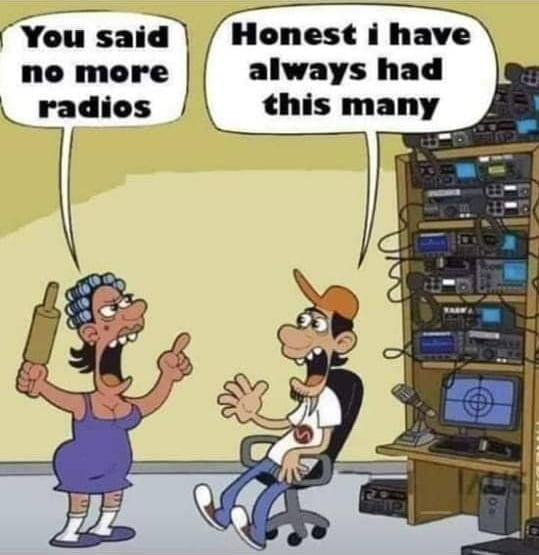 Because I had sold the majority of the equipment I previously owned, I’ve had to build the station up once again.

Having returned to the ham radio hobby just a few months ago, I now also find myself at a new QTH.

For the non-ham, QTH means location, this being the spare room for a shack.

QSL, QTH, QSO, Q-what?? – Q codes are used by radio amateurs as a shorthand method of conveying information – read about them here.

Here are my most recent QSO’s – every contact is added to the log at the end of the QSO.
Mobile and portable contacts are added as soon as practicable.